What is rope bondage?

Japanese rope bondage is an expression of our deeply rooted desire for submission and domination.  The aesthetic arrangement of ropes and knots on the model’s body emphasise sensuality, vulnerability, strength and submission.

Shibari is closely related to the traditional Asian medical philosophies of Bokam and Ki-energy.  It also draws on knowledge of meridians and Trusbo (pressure points), used in Shiatsu, a form of Japanese massage.  The positioning of knots in appropriate places stimulates pressure points on the body.  Many believe a Shibari experience stimulates Ki energy flow and transfer.
In addition to creating beautiful patterns with rope, body and limb placements, a Shibari experience results in a release of endorphins, creating a trance-like experience for the bottom/model and an adrenaline rush for the Top/rigger.  These effects are visible in the face of the model when a Shibari scene is performed. The term “rope drunk” is sometimes affectionately used to describe the euphoric condition of the model after a Shibari experience. 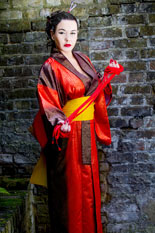 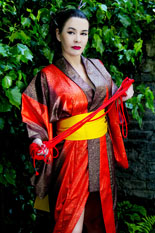 A History of Japanese Rope Bondage

Shibari developed from Hojo-jutsu, the Japanese martial art of restraining captives. There were no jails in Japan during the 15th and 16th Century, so the local police and Samurai used Hojo-jutsu as a form of imprisonment and torture.  The honor of these ancient Samurai warriors required them to treat their prisoners well. So, they used different techniques to tie their prisoners, showing the honour and status of their captured prisoner.

Kinbaku became widely popular in Japan in the 1950s through magazines such as Kitan Club and Yomikiri Romance, which published the first naked bondage photographs. In the 1960s, people such as Eikichi Osada began to appear performing live SM shows often including a large amount of rope bondage, today these performers are often referred to as Nawashi (rope master) or Bakushi (from kinbakushi, meaning bondage master).

Please take your time to look through Gallery which presents options of Japanese Rope Bondage available for your needs.

You are very welcome to contact Domina Octavia by phoning on 0871 234 9467. PLEASE NOTE: THIS PHONE DOES NOT ACCEPT TEXT MESSAGES!

Alternatively you are welcome to send an email to my email address: domina@art-of-bdsm.com